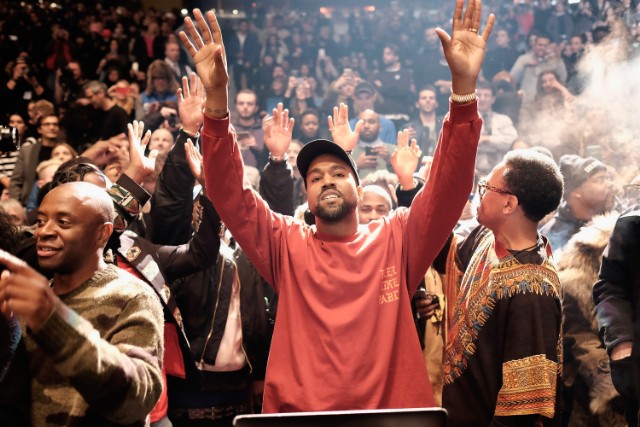 CHR Comment: A pop culture use of the story of Jesus’ crucifixion as commentary on the Hollywood culture of attacking its own idols.

The wording of the First Commandment in Luther’s Catechisms may, at first, feel a bid strange: “You shall have no other gods” (Exodus 20:3). How does one have a god? Such wording seems to imply that there are indeed other gods beside the one true God.

You shall have no other gods before me. You shall not make for yourself a carved image, or any likeness of anything that is in heaven above, or that is in the earth beneath, or that is in the water under the earth. You shall not bow down to them or serve them, for I the Lord your God am a jealous God, visiting the iniquity of the fathers on the children to the third and the fourth generation of those who hate me, but showing steadfast love to thousands of those who love me and keep my commandments.

We see then that the Lord forbids His people to have or make gods/idols before which they would bow down or serve (cf. Exodus 32). To understand the word “have,” consider the following expressions: I have a family; I have a father; we have a president. The word “have” does not mean simple possession of something. It describes a relationship—a bond—between persons or things. The Creator will not allow His creation to set up objects or barriers between Him and His people. As He said it positively and emphatically in the opening to the Ten Commandments:

Now that He has freed Israel from the bondage of Egypt, He will not let them return to bondage by serving other gods or masters. This truth is foundational, not only to biblical/Christian faith, but also to western ideals of the freedom and value of the individual. Each human being is loved by God and, as a created being, has a direct relationship with the Creator.

The First Commandment, “You shall have no other gods,” seems to imply that other gods are real and that one can have a relationship with them. One may rightly ask, is this true?

The Bible consistently speaks against the idea that the figures of idols are true gods. Perhaps the best example of this is the prophet Isaiah’s satire of a person carving an idol from a block of wood (Isaiah 44:9–20) and then using the wood trimming to warm his room and bake his bread—an excellent example of humor in the Bible!

But seriously, those who worship idols usually regard them as representations or manifestations of spiritual realities. In fact, archaeologists now believe that a bull calf idol of the ancient Near East actually represented the mount or throne for the god (typically Baal) who stood upon it. So, the idolaters were really directing their devotion beyond the wood, stone, gold, or silver that stood in front of them. The idol was a way to reach beyond and to “have” a connection to the god it represented. Modern religions that use idols have a similar understanding.

The apostle Paul strongly warns against idolatry and sacrifices to idols when he writes: “I imply that what pagans sacrifice they offer to demons and not to God. I do not want you to be participants with demons” (1 Corinthians 10:20; cf also Revelation 9:20). The biblical view then is that there are indeed spiritual realities—demons/false gods—standing behind idolatrous and false worship. So false worship can in no way honor the one true God.

In the First Commandment God is delivering something like an ultimatum to us: you will have Me as God or you will have some other god, you can’t have both. To this He attaches a warning and a promise: (1) as the only true God, He will punish those who hate Him (Exodus 20:5) but (2) He will likewise show steadfast love to those who love Him and heed His word (20:6).

The greatest form of idolatry today is not that people will bow down to a statue but that people will cling to someone or something other than the one true God. (As I’ve noted in an earlier post, even atheists have a god: whatever they trust.)

True faith teaches a singularity of heart, to have one’s confession of faith, one’s life, and one’s actions focused upon and giving honor to The One. Because our lives are so hectic, it becomes more and more difficult to have this singularity of heart. Mere busyness delivers us from idleness but pushes us toward idolatry as we struggle to meet all our commitments. The One—the true God—becomes for us a face in the crowd rather than the object of our devotion, set apart and consecrated above all things.

In the end, true faith calls for more than a different belief but a different way of life that expresses that belief. Life with God and living for God go hand in hand. We see this most clearly in the person and work of Jesus. The balance in His life is truly remarkable. He had great gifts of teaching and healing so that crowds sought Him and huddled about Him, to the point where He was jostled and pushed and overwhelmed by them. Mark 1 records:

That evening at sundown they brought to [Jesus] all who were sick or oppressed by demons. And the whole city was gathered together at the door. And he healed many who were sick with various diseases, and cast out many demons. And he would not permit the demons to speak, because they knew him. And rising very early in the morning, while it was still dark, he departed and went out to a desolate place, and there he prayed. And Simon and those who were with him searched for him, and they found him and said to him, “Everyone is looking for you.” And he said to them, “Let us go on to the next towns, that I may preach there also, for that is why I came out.”

Even when everyone around Jesus demanded His attention—and deservedly so—He slipped away to pray to His Father, to commune with Him but also to intercede for His disciples and those who came to Him with all their needs. This singularity of heart, focused on the Lord and His calling, helped Jesus with the day to day struggles as well as His ultimate commitment: His calling from the Father. As a man, Jesus was overrun with demands yet He remained singularly devoted to His Father and entrusted all His cares and burdens to the Father for the sake of those who would listen to Him. 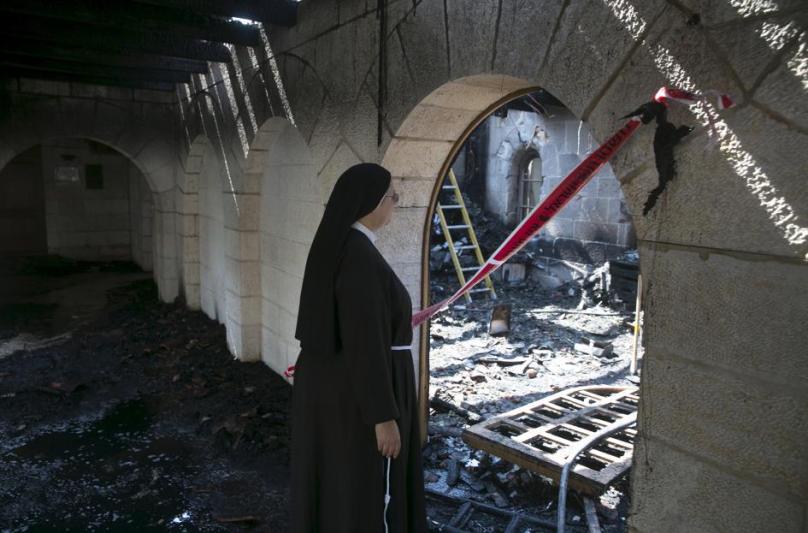 CHR Comment: The Church of the Multiplication is built over an ancient site associated with Jesus’ miracle of multiplying bread and fish to feed hungry crowds. It is the third church burned by Jewish terrorists who, spurred on by some rabbis, regard Christians as idolaters that must be driven from the Holy Land. According to the National Geographic article, young Jewish terrorists are adopting tactics against Christians that Jews and Muslims have used against one another for many years.

Christians in Iraq experience another form of persecution, characterized as idolaters.

The attack on an elderly nun also included the removal of a cross and placement of a hindu idol in the church. This illustrates that the persecution is not just random violence but specifically religious. Lord, have mercy. 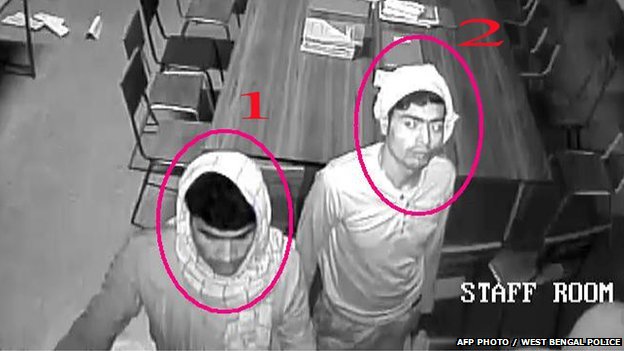