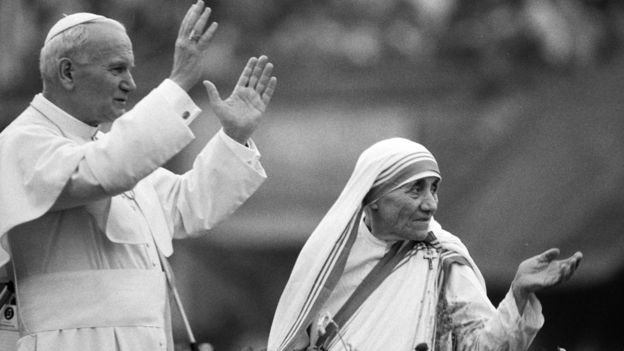 Mother Teresa, the nun who worked with the poor in the Indian city of Kolkata, will be declared a saint on 4 September, Pope Francis announces.

CHR Comment: Mother Teresa was the most famous nun and, alongside of the popes, was the most well recognized Roman Catholic leader in the twentieth century due to the high respect people had for her labors of mercy in Kolkata. Yet as the article describes, she was a controversial figure in some respects due to associations with some people drawn to her work. Additionally, in 2007 a collection of her personal letters came to publication, which showed that she endured decades of spiritual struggle without feeling the presence of God in her life, as described by the Time article in the second link below. Her statements in these letters have drawn sharp criticism from atheists who point to them as evidence that God did not truly exist for her. One wonders which interpretation of Mother Teresa’s life will dominate. In any case, she clung tenaciously to her beliefs and practices as a Roman Catholic Christian in the face of her feelings.

I add this thought: Ironically, if atheists appeal to the feelings of Mother Teresa as an argument against her religious beliefs, they are essential appealing to emotions/feelings as an argument for their beliefs. This seems to contradict their own beliefs in rationally based arguments. Their argument is really more rhetorical than rational.

Source: Mother Teresa to be made a saint, Pope Francis announces – BBC News